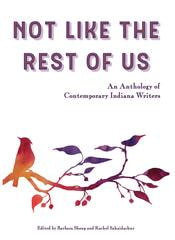 Not Like the Rest of Us: An Anthology of Contemporary Indiana Writers is a publication of the Indiana Writers Center. The title comes from an essay about Cole Porter by Muncie author, Cathy Day.

Partially funded by an Indiana Masterpiece Grant from the Indiana Arts Commission and the Indiana Bicentennial Commission and Indy Reads Books, the collection includes more than 75 notable writers of fiction, creative nonfiction, and poetry from around the state—among them: Marianne Boruch, winner of the Kingsley-Tufts Award; Jared Carter, winner of the Yale Younger Poets Award; Christopher Coake, winner of the PEN/Robert Bingham Fellowship; Mari Evans, winner of the John Jay Whitney Fellowship; Helen Frost, winner of the New York Historical Society’s Children’s History Book Prize; John Green, winner of the Printz medal for Young Adult Fiction and the Edgar Award; Patricia Henley, finalist for the National Book Award;  Adrian Matjeka, finalist for the National Book Award and the Pulitzer Prize; Susan Neville, winner of the Flannery O’Connor Award for Short Fiction; Scott Russell Sanders, winner of the Lannan Literary Award and the Mark Twain Award; and Dan Wakefield, winner of a Rockefeller Grant for Creative Writing. The most experienced writers here are in their nineties, the youngest in their twenties. Some are best-selling authors, some widely known in literary circles, some just beginning. Many were born and raised in Indiana, others found their way here and stayed.

An officially endorsed Indiana Bicentennial Legacy Project, the book extends the appreciation of Indiana’s rich literary heritage into the 21st century, celebrating authors who are bringing honor to the Hoosier state in our own time.

Purchase the anthology at www.indianawriters.org